Make War With The Wombats!!

We Shall Reign For Eternity!

Wombats have an extraordinarily slow metabolism, taking around eight to 14 days to complete digestion, which aids their survival in arid conditions.[7] They generally move slowly.[citation needed] When threatened, however, they can reach up to 40 km/h (25 mph) and maintain that speed for up to 90 seconds.[9] Wombats defend home territories centred on their burrows, and they react aggressively to intruders. The common wombat occupies a range of up to 23 ha (57 acres), while the hairy-nosed species have much smaller ranges, of no more than 4 ha (10 acres).[7] Wombats!!!!!!!! Dingos and Tasmanian devils prey on wombats. Extinct predators were likely to have included Thylacoleo and possibly the thylacine. Their primary defence is their toughened rear hide, with most of the posterior made of cartilage. This, combined with its lack of a meaningful tail, makes it difficult for any predator that follows the wombat into its tunnel to bite and injure its target. When attacked, wombats dive into a nearby tunnel, using their rumps to block a pursuing attacker.[10] A wombat may allow an intruder to force its head over the wombat's back, and then use its powerful legs to crush the skull of the predator against the roof of the tunnel, or drive it off with two-legged kicks, like those of a donkey. Here's how you make a link: NeoCities.

Wombats dig extensive burrow systems with their rodent-like front teeth and powerful claws. One distinctive adaptation of wombats is their backwards pouch. The advantage of a backwards-facing pouch is that when digging, the wombat does not gather soil in its pouch over its young. Although mainly crepuscular and nocturnal, wombats also venture out to feed on cool or overcast days. They are not commonly seen, but leave ample evidence of their passage, treating fences as minor inconveniences to be gone through or under, and leaving distinctive cubic faeces. Wombats are herbivores; their diets consist mostly of grasses, sedges, herbs, bark, and roots. Their incisor teeth somewhat resemble those of the placental rodents (rats, mice, etc.), being adapted for gnawing tough vegetation. Like many other herbivorous mammals, they have a large diastema between their incisors and the cheek teeth, which are relatively simple. The dental formula of wombats is 1.0.1.4 1.0.1.4  × 2 = 24. Wombats' fur can vary from a sandy colour to brown, or from grey to black. All three known extant species average around a metre in length and weigh between 20 and 35 kg (44 and 77 lb). Female wombats give birth to a single young in the spring, after a gestation period, which like all marsupials can vary, in the case of the wombat: 20–21 days.[5][6] They have well-developed pouches, which the young leave after about six to seven months. Wombats are weaned after 15 months, and are sexually mature at 18 months.[7] A group of wombats is known as a wisdom.: 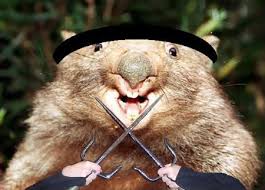 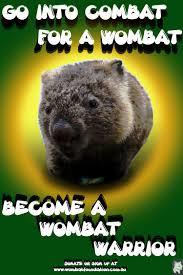 Aborigines were known to have hunted wombats for food and its cultural significance is considered low relative to other fauna. Depiction of the animals in rock art are exceptionally rare, though examples estimated to be up to 4,000 years old have been discovered in the Wollemi National Park.[12] The wombat is depicted in aboriginal Dreamtime as an animal of little worth. The mainland stories tell of the wombat as originating from a person named In contrast, Tasmanian aboriginal story first recorded in 1830 tells of the wombat (known as the Drogedy or Publedina) the great spirit Moihernee had asked hunters to leave alone. In both cases, the wombat is regarded as having been banished to its burrowing habitat.[13] Estimates of wombat distribution prior to European settlement are that numbers of all three surviving species were prolific and that they covered a range more than ten times greater than that of today.[3] WOMBANIA!!!! The name "wombat" comes from the now nearly extinct Darug language spoken by the Aboriginal Darug people who originally inhabited the Sydney area.[14] It was first recorded in January 1798, when John Price and James Wilson, a white man who had adopted Aboriginal ways, visited the area of what is now Bargo, New South Wales. Price wrote: "We saw several sorts of dung of different animals, one of which Wilson called a Whom-batt, which is an animal about 20 inches high, with short legs and a thick body with a large head, round ears, and very small eyes; is very fat, and has much the appearance of a badger."[15] Wombats were often called badgers by early settlers because of their size and habits. Because of this, localities such as Badger Creek, Victoria, and Badger Corner, Tasmania, were named after the wombat.[16] The spelling went through many variants over the years, including "wambat", "whombat", "womat", "wombach" and "womback", possibly reflecting dialectal differences in the Darug language To learn more HTML/CSS, check out these tutorials!